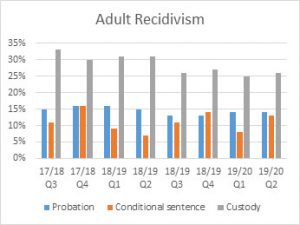 Individuals sentenced for criminal convictions have varying risk levels and receive different kinds of sentences depending on their record and the severity of the offence. For this reason, Manitoba Justice tracks seven different recidivism rates, three for adults and four for youth, according to the types of sentences imposed.

In Manitoba, we calculate recidivism as occurring when a person is convicted of a new offence and is returned to provincial custody within two years of release from jail or other correctional supervision. Some sentence types (non-probation sentences for youth and conditional sentences for adults) show considerable variation in their recidivism rates from quarter to quarter, which makes it difficult to identify upward or downward trends in these measures. For measures where trends are more easy to discern:

There is no standardized definition or method of calculating recidivism, the rate at which people become re-involved in criminal activity. Manitoba Justice gathers recidivism data quarterly, which means our calculation counts the number of people whose sentences expired two years earlier and were re-convicted in the three-month time period we are looking at. When reviewing quarterly data, it is important to note that one individual could be re-convicted more than once over the two years since they were first released from jail or supervision, so a single person may be included in multiple quarterly reports. However, we do not believe that this occurs often enough to meaningfully affect the overall results. Other jurisdictions use different criteria, so their recidivism rate will look different from ours.

Lowering recidivism rates means the system is succeeding in rehabilitating offenders, which means less crime in our communities and that offenders are increasingly able to live more fulfilled lives.

Strategies aimed generally at crime prevention, by focusing on community mobilization, collaboration with police, and mental health and addictions, will also help reduce crimes committed by individuals with previous involvement in the justice system. Timely disposition of criminal matters also helps offenders enter rehabilitative programming earlier and for longer periods. The Responsible Reintegration Initiative ensures individuals released from custody have a plan and resources in place to assist with successful reintegration into society, reducing the risk of further criminal involvement.