Manitoba private capital investments were valued at $5.0 billion in 2019, up 4.5 percent from the $4.8 billion recorded in 2018. On this basis, Manitoba ranked fourth across the country in annual growth.

Private capital investment is based on new spending on construction, machinery and equipment within the province. Spending excludes spending on residential construction.

Ranking is based on the annual performance among the ten provinces. 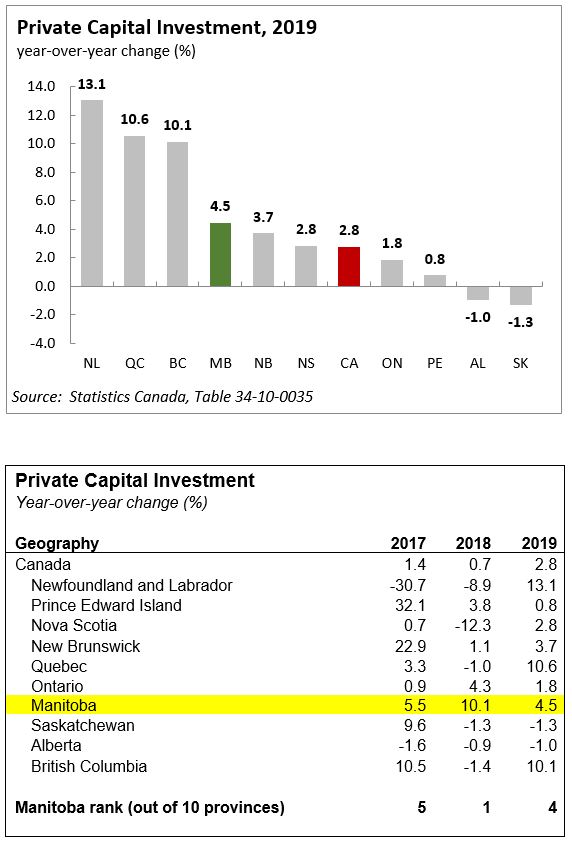 Private capital investment ranking is based on year-over-year growth rate change, and compared to the annual performance among the ten provinces. The data is derived from the Annual Capital and Repair Expenditures Survey: Actual, Preliminary Actual and Intentions (CAPEX). This annual survey collects data on the intentions for capital expenditures and the expenditures for the previous two years. On occasion, where economic changes justify the need, data on the revised intentions are also collected for the current year. Information on capital spending provides a useful indication of market conditions, both in the economy at large and in particular industries. Since such expenditures account for a large and relatively variable proportion of gross domestic expenditures, the size and content of the investment program provides significant information about demands that have been placed upon the productive capabilities of the economy during the period covered by the survey.

Increased private capital investment allows business to expand their products and services. This expanding capital structure raises productivity and efficiencies of labour. Increased efficiencies in the economy can lead to increased economic growth.

The government will continue to foster private investment for economic growth.