Manitoba enjoys one of Canada’s most clean electricity grids – over 99 per cent of electricity generation comes from renewable sources, including:

Manitoba is constructing the Keeyask generating station, which will add 695 megawatts (MW) of renewable electricity capacity in the province by 2021, with its first generator expected to go into service in October 2020.

Manitoba Hydro also purchases power from other non-utility generators in the province. Aside from the existing wind purchase from the two wind farms in the province (120 MW wind farm in St. Leon and 138 MW wind farm in St. Joseph), in late 2018, Manitoba Hydro executed a solar power purchase agreement with Fisher River Cree Nation for a 20-year term. The solar capacity is approximately one megawatt and is expected to generate one gigawatt-hour annually, enough to power 400 homes. Manitoba currently has approximately 20 megawatts of installed solar capacity, with almost all of the installations less than 200 kilowatts.

Manitoba is monitoring the impacts of COVID-19 pandemic to the percentage of renewable energy generated in the province. Manitoba Hydro continues to generate its electricity from hydro, with addition from wind and solar, and it is not anticipated that the pandemic will increase province’s thermal electricity generation.

Statistics Canada reports monthly electricity generation by source type on a monthly basis, for Canada and each province and territory. The data is published approximately two months following the generation month (e.g., generation for the month of January will be published in April). Statistic Canada publishes total generation and by type (wind, hydro, solar, etc.). Though the agency has not published conventional steam and internal combustion turbine generation for Manitoba since 2015, but the total generation appears to include such generation.

Neither Statistics Canada nor Manitoba Hydro publish off-grid generation data, which accounts for a proportionally small contribution in the province.

How we are doing over time 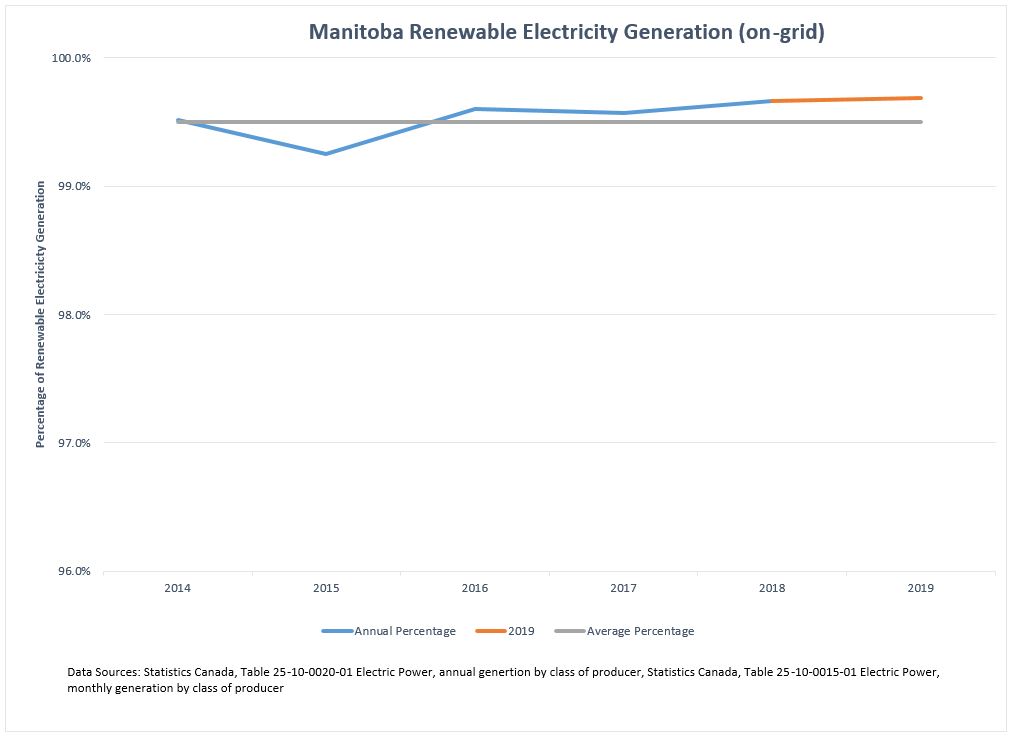 The Climate and Green Plan vision is for Manitoba to become the cleanest, greenest and most climate-resilient province. This includes mitigating GHG emissions. Renewable energy generation in Manitoba, through clean Hydroelectricity, wind and solar generation, reduces GHG emissions and improves air quality and public health locally and outside the province as it displaces fossil fuel-based generation.

Manitoba continues to invest in renewable energy generation and transmission of clean electricity to other jurisdictions, where economically feasible.

Manitoba will continue to measure and report annually the percentage of on-grid renewable electricity generation.